Hello Friends!  Many of you have been asking where I will be this year, and some of you are already aware that 2015 has brought a change.

The time has come for me to move on from Dennis DeYoung and the music of Styx.  I know at times in order for new doors to open, old ones need to close.

I will of course still be with my band mates in Mannheim Steamroller. I will also be performing my own music live in support of Lifting the World, and I look forward to other opportunities as well.  I’m so excited to reach for what is next, and to perform new music.

My goal is always to motivate, inspire, lead by example, and be a positive role model - to help others achieve their goals, and show that anything is possible.  Stay with me on this journey, and we’ll continue to do it together!

As always, thank you so much for your support and kind words!  I’m just getting started, friends.  The best is yet to come.

Tom
Posted by Tom Sharpe at 7:57 AM No comments:

Second blog in just one year!

Since my last blog was over half a year ago, I guess it goes without saying that I haven't quite gotten in the swing of this idea yet!  But, I will try again, and hope to keep things more updated.  I'm sure all three of you are thrilled at this news!  ;-)

So, to sum up the last 7 months without going into too much detail -

It was fun.  Thanks everyone - take care!

Alright, a little more detail than that.  After all, you're here, right?

The last part of 2012 was what is starting to be a familiar whirlwind.  I finished up a few wonderful concerts of my own (Jeff Elbel, Theresa Brooks, Paul Ross, and Amanda Nelson, pictured) 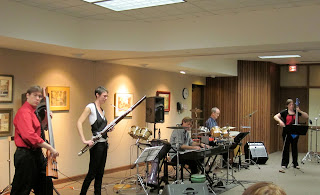 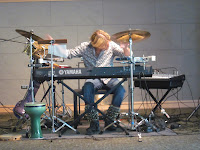 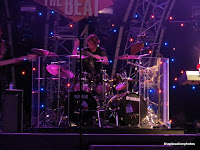 ...and finished up the Dennis DeYoung 2012 tour with a great series of concerts at Epcot Center and in Iowa.  Dennis is just so amazing, and his voice is better than ever.  Nothing like having the best seat in the house to witness this legend sing his timeless songs.  Oh, that's right - I can't be so amazed that forget to play!! 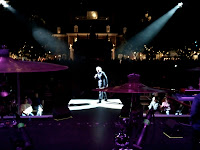 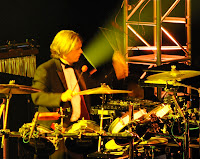 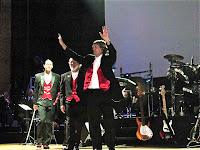 Then it was immediately off to the 2012 Mannheim Steamroller Christmas tour, which is always a blast, and seems to go much too quickly.  Covering almost 50 concerts in nearly as many cities over a two month period leaves little time for reflection.  And, just like that, it's over.  What an honor to play these songs and arrangements by Chip Davis in these beautiful theaters, and to continue the legacy that is the number one selling Christmas tour of all time (take that, Bing Crosby)! 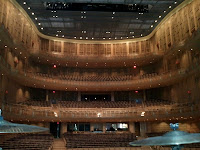 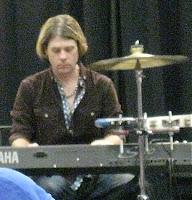 After a short break at the beginning of January to nurse my tattered hands back to health, 2013 has already been wonderful and diverse.  I couldn't ask for more, starting the year with a concert of my own music and welcoming Jennifer Lowe as a new member of my ensemble!  (Amanda Nelson,Theresa Brooks, Jeff Elbel, and Jennifer Lowe, pictured) 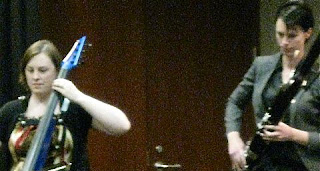 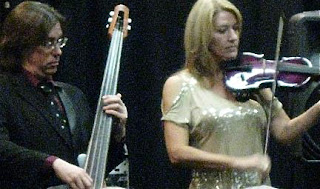 The tour schedule is already looking busy in the months to come for the Dennis DeYoung band.  Our Feb/March shows in Florida and California proved there will be no slowing down this year (Larry Baird, Craig Carter, Suzanne DeYoung, Dennis DeYoung, Jimmy Leahey, August Zadra, and John Blasucci, pictured) 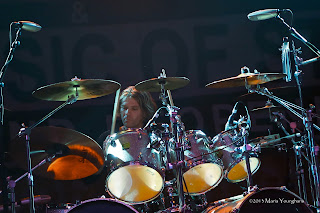 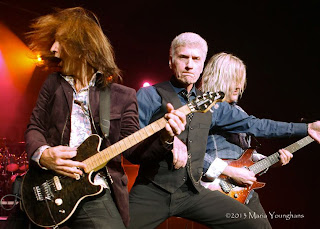 And February also found me on the road with my own music.  There is something about packing up a ton of equipment and hitting the highway on a solo tour.  It's like stepping outside and taking a deep breath of fresh morning air..or..something like that! 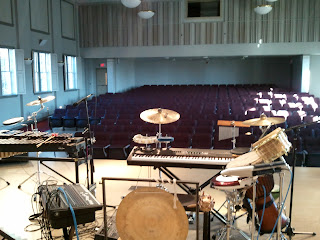 I spent a few days in North Carolina.  Performing concerts and giving master classes to university students at Garder-Webb University, as well as some of the surrounding public schools.  This was another reminder of how special it is for me to have these opportunities to perform my own music.  There is something happening here that is really wonderful - a connection with the audience that further makes me believe I am doing the right thing.

These concerts were followed by a keynote address at the 13th Annual Self Employment in the Arts conference, and a presentation for the music students at Concordia University. 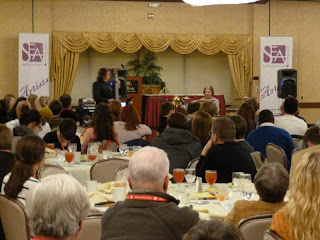 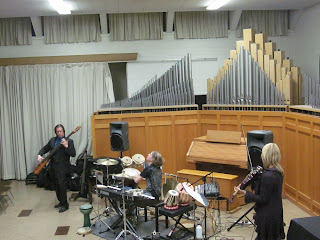 I'm double dipping, as I'll be opening two Dennis DeYoung concerts with solo performances of my own music (see my performance dates for details www.tomsharpe.com).  Something tells me I may sleep for a while after performing those shows, but if all goes well, it will give me material for my next blog!


How I came to judge the Miss New Mexico Pageant!

I love to meet fans!  I feel making that connection is so important and meaningful, for both them and me.  After a concert, I actually look forward to the autograph line!  However, I get a lot of interesting invitations from the folks coming through that line.  It’s something that you let roll off and not take too seriously.  It’s just the nature of the profession.
I’ve heard a lot, so when I was in Lubbock, TX last winter performing with Mannheim Steamroller, I didn’t take too seriously the lovely lady that asked me to judge the Miss New Mexico Pageant in June, or the handwritten card she gave me that said the same.  Until….I turned the card over and saw the printed side, which said “Carol Henry – Executive Director, Miss New Mexico Pageant”.  Then I said something that stuck with her – “I am intrigued!”

Since that time in late 2011, Carol and I have had a great e-mail dialogue, getting to know each other, discussing the pageant and the specifics, and more importantly, being honest about how unlikely it would be for me to actually have that amount of time off in mid June, which is one of my busiest touring months with Dennis DeYoung.

It must have been fate that I was meant to judge this pageant.  With almost every week of summer being booked, amazingly, the pageant dates didn’t fill in with concerts, and on June 20, I found myself on a 6 AM plane to El Paso TX, en route to Ruidoso, New Mexico!

Although the pageant festivities began for me in New Mexico on June 20, my job started several weeks before that, when I received a very thick binder in the mail with all the contestants head shots, resumes, platforms (i.e. missions for the year), and statements, along with all the rules of judging in the Miss America program.  My instructions were to read everything, and then come up with 4 specific questions for each contestant, along with 10 general questions I would be able to ask any of them for their interview portion of the pageant.  After the initial excitement of seeing these lovely young ladies head shots wore off, I was left with one thought – “This is a lot of work!!!”  However, since I don’t do anything half way, I rolled up my sleeves and started my preparation.  By the time I headed to New Mexico, I was ready.

Perhaps surprisingly for it being my first pageant, I went into this with extremely high expectations.  With these contestants all having educational achievements off the charts, platforms ranging from preventing domestic violence, environmental issues, children’s medical research, and career ambitions ranging from doctors, lawyers, teachers, colonels in the military, and more, I knew I wasn’t just judging a beauty contest.  I had the bar set extremely high from the beginning and expected these ladies to nail it.

For 4 days, a panel of esteemed judges (and me, lol) was treated to a competition of 19 sophisticated, classy, charming, and talented young ladies.  All of who were absolutely beautiful in many ways.  It was a difficult judging process, and one that none of us took lightly.  We handled this with great care, knowing that we were going to change the life of one person forever, and hopefully inspire many of the contestants.

At our first judges meeting, the executive director Carol told us something that had a lasting impact on me the whole time I was making my considerations.  She said that this group of young ladies had the potential to have a Miss America.  The winner of Miss New Mexico always competes in the Miss America pageant, but this year, the task in front of us was to pick a winner.  No pressure there.  ;)

I am not sure about confidentiality rules regarding the Miss America organization and letting you in on the judging process.  So, without going into any detail about the actual judging, we as a collective 7 judges are extremely proud of our new Miss New Mexico, CANDICE BENNATT.  Not only will she be a great ambassador for the state of New Mexico, I know that she is going to blow them away at the Miss America pageant. 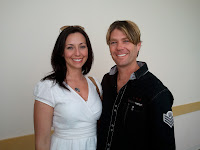 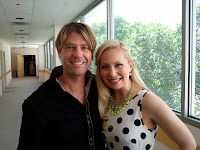 One unexpected surprise was how fun it was to meet and spend time with the other judges.  I was honored to be judging with Katie Harman (Miss America 2002) and Erin Griggs (Miss New Mexico 2002), Jayne Carroll, Jerry Westheimer, Tom Battin, and Barbara Rice, all of who were talented, smart minded, and an absolute pleasure.  I feel like I developed some real friendships!  And, to be treated like a star all week by Carol, Karen, Judy, and Jim was just so very special.  This, along with the host parties and a multitude of guest visits from former and current Miss and Miss Teens from across the country made this a memory I will never forget. 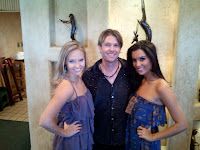 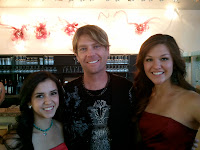 Oh, did I mention, I performed twice, including on stage at the finale?  :) 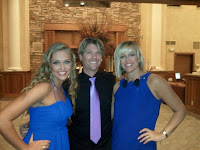 My Mom is a huge Miss America fan.  It was such fun sharing pictures with her that I would snap this week on my phone (like me with our emcee Kellye Cash, Miss America 1987!).   Growing up, the pageant was mandatory watching at our home – a tradition that she still has, and has been adapted by my sister as well.  I, unfortunately, had lost touch with the pageant over the years. 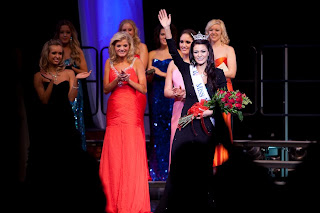 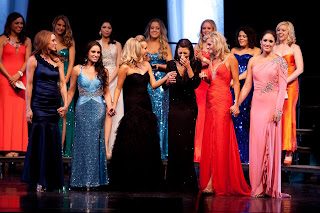 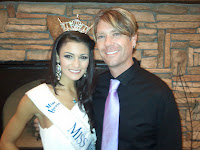 This year, I’ll be watching…and rooting.  Go Candice!!!
Posted by Tom Sharpe at 9:06 AM No comments: